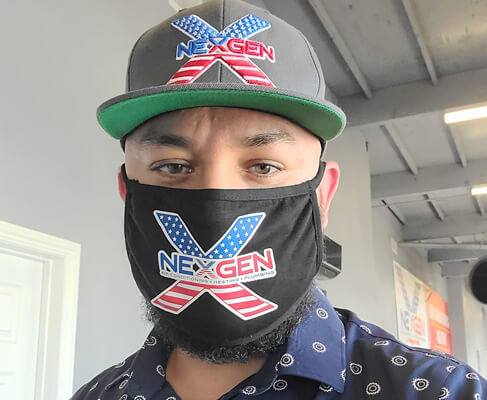 Episode 41: The NEXGEN Triple OG of the Trades

Owner and CEO of Nexgen, Ismael Valdez is a self-proclaimed hustler. From “counter guy” at a wholesale distributor to starting and growing his own HVAC+plumbing company to over $30 million in just three years, Ismael is one of the brightest and most exciting minds in the home services industry today.

Ismael wants to grow to 100 million dollars in the fastest and healthiest way possible, and is well on his way to achieving this incredible goal. This year, his company is set to reach 36-38 million in just their 5th year in operation. While he may give all the credit to his team, Ismael is a true triple OG and complete badass when it comes to the trades and business in general.

Leaving the Counter Behind

Ismael started in heating and air conditioning when he was 17, working the counter at a wholesale distributor in SoCal. The owner of the company, Jeff Winter, was a man who Ismael credits with quite a lot. He treated Ismael well, teaching him the ins and outs of the industry while compensating him generously for his work. Even though hundreds of the contractors and technicians passing through tried to recruit Ismael during his 9 years with the company, he planned on staying there for a very long time.

Eventually, the prospect of a new venture stole Ismael away. He joined a new team, and helped grow that business to over 20 million in only 4 years. Unfortunately, the owner and he ran into a disagreement, and Ismael was let go. He was devastated.

The Next Generation of Contractor

After being let go, Ismael had a new chip on his shoulder; a new “middle finger motivation”. He was determined to prove his old partner wrong, and to finally be in business for himself. He was going to do things his way, and not have to worry about having someone else in control of his destiny.

This all led to the creation of Nexgen. Even during his time at Howard Industries, Ismael had friends in the industry. They were always hustling, installing systems and doing side jobs for friends and family. Of course, they all dreamed about having their own business. They referred to their crew as the next generation, meaning the next wave of contractors that did things better. Ismael took that name and shortened it, creating Nexgen Air Conditioning Heating & Plumbing, and hasn’t looked back. Now, Ismael’s motivation comes from his family, towards growth, and in learning the process of achieving that 100 million-dollar mark.

Reputation As a Key To Growth

One of the most impressive things about Ismael and Nexgen isn’t that it grew to over 30 million in 3 years, but that they were able to maintain a 5-star on Yelp and other review platforms during this rapid expansion. Currently, Nexgen has 8 branches across Southern California, and averages between 4.5-5 stars on most of them on Google, Yelp, and Facebook. Any contractor or small business can attest to how difficult this is. Ismael’s success comes from his method of handling dissatisfied customers. The second a bad review comes in, Ismael immediately contacts that customer to figure out what went wrong, and how to improve that customer experience. He hears out the customer, and then after explaining who he is as a person and what his team stands for works to figure out a solution that will leave that customer feeling better about the service. It could be a complete refund or giving the service another try, but Ismael is hellbent on ensuring every customer is happy no matter what it takes.

The key is handling it immediately. Ismael points out that waiting even just a day means that you’ll miss the window of time where the customer is really upset. That’s when you want to catch them, so they can vent their frustrations and give you the opportunity to make things right. Ismael has assembled a top-tier management team who he has been training on how to approach these situations. They all have email alerts set so that the second a 1-star review comes in, they can drop what they’re doing and get it taken care of right that second.

This attention to customer satisfaction has earned Nexgen and Ismael a solid reputation, which is integral to your long-term success as a business. If you subscribe to Ismael’s vision, the future is in review-based contracting, meaning your reputation is more important than ever.

Right Pieces in the Right Places

During the first five years in business, Ismael notes that one of his biggest hurdles was finding the right people and products, as well as getting those people in the right positions for success. He is notorious for being fearless to try something, and fearless to change things when they don’t work. While most contractors would fill a position and wait a year or more to see how things pan out, Ismael will move that person around after a month if he isn’t seeing the results he wants.

This method can be emotional for people, but most are still with his team. In fact, the majority look back and understand exactly why the change was necessary. Ismael sees all of the pieces, and if they aren’t working together, he’s fast to shift them around and find a better way forward.

Not only is Ismael working on growing Nexgen, he’s always looking for ways to improve his company as well as the entire industry. He’s developing datacube, a live KPI tracker that provides reporting for everything that’s happening inside your company in real time. Most companies have a few people that pull reports manually, going through line items and making mistakes. With datacube, you can focus on accurate reporting and see the exact capacity of your team at any given moment. It tracks 9 aspects of your business simultaneously, with everything from sales and marketing to the centerpiece: your revenue and capacity. You’ll see your average ticket for the day, how many installs and services you have scheduled, and whether you’re operating over or under capacity. Ismael is still perfecting datacube, and it’s an exciting new service that integrates seamlessly with any other softwares you’re currently using.

You can also find Ismael being active in the Service Avengers group on Facebook. It’s a collection and collaboration of members in the services industry who truly want to help each other. They bounce ideas off of each other, answer questions for one another, and are always welcoming to new members with a like mindset!

Ismael is paving the way for the next generation of contractors, and we’re excited to see where his already impressive career goes next. His message for the haters?